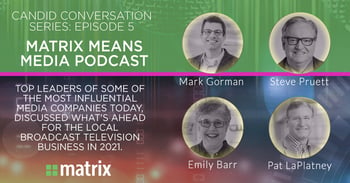 Listen in to hear Matrix CEO, Mark Gorman, join top leaders of some of the most influential media companies today including Steve Pruett (Executive Chairman of the Board, CMG/Apollo), Emily Barr (President & CEO, Graham Media), and Pat LaPlatney (President/Co-CEO, Gray Television Inc) as they kick off the New Year with an executive-level view, discussing what's ahead for the local broadcast television business in 2021.

...and don't miss the 'pre-game' session with Mark Gorman and Matrix CRO, Brenda Hetrick, where they set the stage for the upcoming conversation before the panel kicks off!

Check out more episodes at www.MatrixMeansMedia.com